The Electoral Commission (EC) has said all is set to commence the voter’s registration exercise on, Tuesday, June 30.
Mr Fred Tetteh, a Deputy Director for Research at the Commission, said already the personnel were trained, materials and the equipment distributed to all the 33,367, polling stations for the exercise.
He said the exercise would be in phases and about 6, 000 were expected to register in each phase for six days.
He said the new equipment were modern and fast and one could complete the registration process in about seven minutes.
Mr Tetteh took them through the health protocol processes on what they should expect at the centres, involving the washing of hands, checking of temperature and joining the two-metre distance marked queues.
He explained that a person would first need to show either a passport or the Ghana Card as proof of identity.
Mr Tetteh also took them through the process of vouching for a person who would not have any of the two identification cards, and the online process for pregnant women, GFD and persons above 60 years.
Asked about persons without fingers, he explained that the person’s facial algorithms, like the contour, iris, tissue, nose, mouth, checks and shapes would be captured.
Madam Rita Kusi Kyeremaa, Executive Director of Ghana Federation of Disability of the two million disability population in Ghana about 500,000 of them were eligible and are expected to participate in the upcoming voters’ registration.
She said the Federation’s population was enough to decide a win for a candidate of a political party. 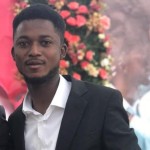 Nungua: JHS student in court after assaulting teacher over homework

Akuapem Poloo convicted over a nude photo with son